Read how the biblical story of Jonathan centers on a vision implementation with practical applications for leaders.

When my wife and I celebrated our twentieth wedding anniversary, I pondered what gift to give to her on such a momentous occasion. This idea came to me: I would give her less of me! I would go on a diet and exercise regimen, and by the time our anniver­sary date came around, she would be able to see the difference. This concept started with a personal vision of what could be. I could get in shape. I could feel better. All this was possible.

Vision, simply defined, encom­passes being able to “see it before you see it.” Before every great invention, accomplishment, transformational idea, someone had vision. Someone “saw it before he or she saw it.”

One of those biblical leaders with vision was Saul’s son Jonathan. First Samuel 14 centers on a compelling story of vision implementation, which has practical applications for leaders. This incident happened at a time when Israel was in bad shape. The Philistines had them on the run. The people were demoralized. The king was distracted. Their enemies were destroying them.

“One day Jonathan said to his armor bearer, ‘Come on, let’s go over to where the Philistines have their outpost.’ But Jonathan did not tell his father what he was doing” (1 Sam. 14:1).1

If you had a plan to attack the enemy, would it not be logical to share that information with the king? Yet Jonathan chooses not to tell his father, the king. He shares this plan only with his trusted armor bearer.

You have to be careful with whom you share your vision. Some people will get upset. Some will oppose your dream. Some will laugh at your con­cepts for visioning the future. Some will question your wisdom. When I told my friends that I wanted to lose weight, I thought I would get unani­mous support. Instead, people said, “You are crazy.” “You won’t do it.” “I tried, but I quit.” You show up with a fist­ful of dreams like balloons, and you are greeted with a handful of straight pins!

Do not expect everyone to be able to see your vision. That is why it is yours! Others may not necessarily understand your foresight because it was not their vision to begin with.

Opposition does not mean your vision is not worth pursuing. While you do not want to be reckless and irresponsible, you do want to step out in faith. Most great ideas were initially opposed or dismissed, so if you are convinced that God has given you a vision you can take criticism in stride. Criticism can help you: it can be the sandpaper to polish the work of art you are building with God. At the same time, do not let criticism stop progress; for whatever God blesses, the devil attacks.

“Meanwhile, Saul and his 600 men were camped on the outskirts of Gibeah, around the pomegranate tree at Migron. Among Saul’s men was Ahijah the priest, who was wearing the ephod, the priestly vest. Ahijah was the son of Ichabod’s brother Ahitub, son of Phinehas, son of Eli, the priest of the LORD who had served at Shiloh” (vv. 2, 3). No one was aware that Jonathan had left (cf. v. 3).

Three groups are camping under the pomegranate tree—and all of them should have a part in a vision to defeat the enemy. There is King Saul, who should have a plan to wipe out the adversary. With him are his soldiers, who should implement Saul’s vision; Ahijah, the religious leader, should confirm that vision. They all should have something to do. But they do not.

The demoralized leaders sit under the pomegranate tree feeling sorry for themselves while Jonathan, a young person, takes action. But no one is aware that Jonathan leaves. While those in authority sit around regretting their previous defeats, the new genera­tion is moving on.

Jonathan prefers death to inac­tivity. He thinks a better plan is to attempt something and fail than to do nothing and succeed. The greatest enemy of the church these days is not worldliness but laziness. God calls us to do something. More important than discussions, charts, ideas, opinions, words, or desires, is action.

What you say is not as important as what you do. Opinionology (a word I coined, meaning “to share with others the opinions no one else is asking you for”) does not come as a spiritual gift.

During the time I was pastoring a certain church, we had a church soc­cer team that we hoped would build community and make friends, and I always got to play. As the game got going, so did the crowd. Everyone had an opinion. I thought that hearing some misguided soul yell, “Take the pastor out; he’s horrible!” was an interesting message. At halftime, people from the crowd would come into our huddle and offer unsolicited advice, strategy, and ideas. Not only were they very straightforward about what we should be doing, they became upset if we did not play the way they prescribed.

Is that not a lot like the work of the church? Many watching, complaining, and advising, but few actually working. Sometimes it seems like 20 percent of the congregation does 80 percent of the work.

God does not expect us to do everything, yet He does expect us to do something. Action inspires your followers, develops your strengths, and catches God’s attention. Perhaps you have, on your computer right now, the blueprint of the next big idea for your organization. What stops you from implementing it? Instead of waiting around for the right circumstances, change your circumstances. They might not erect a statue of you, but your Creator will smile. So do something!

Manage your fear with faith

“‘Let’s go across to the outpost of those pagans,’ Jonathan said to his armor bearer. ‘Perhaps the LORD will help us, for nothing can hinder the LORD. He can win a battle whether He has many warriors or only a few!’ ” (v. 6).

Some fear is natural and even healthy. If, before you act on a vision from God, you are not a tiny bit appre­hensive, then that vision probably does not originate with God. If you already knew you could do it, why would you need God? But if you wait for the fear to subside before attempting something great, you probably never will do it. A visionary will attempt great things regardless of fear.

Jonathan’s faith motivates him to act; he says, “Let’s go!” But concealed in his faith is a crisis of doubt: “Perhaps the LORD will help us,” he says. As part of His plan, God sometimes allows us to experience trepidation before triumph so we will understand that, at the end of the day, it’s not about us.

Early in my ministry, I heard this line that has shaped the way I do ministry. “What are you doing that if God is not completely involved and comes through in a big way, this will absolutely and utterly fail?” Many of the things we do we could do without divine intervention. What have you attempted in the last year that took you outside your comfort zone? What risk, without being reckless, have you proposed to the people you lead? What innovative, daring, out-of-the-box idea have you implemented? Use God’s paintbrush and repaint with vivid colors. Do what­ever it takes to rediscover His passion for your life. You were meant for bold passion.

The power of many

Jonathan understands that while we find it easier to do something alone, it’s more effective when we involve others. There is a small word, with big power, and that word is and. It is one thing to say, “It’s me.” It is altogether another thing to say, “It’s me and my church.” What we sometimes fail to understand in this polarized society is that we need each other. Unity multi­plies impact.

God created us for community. God emphatically shares that a vision should be given to the leader first but not exclusively. A right vision, shared with the right people, at the right time, for the right reason, will accomplish more, in less time. In this life, we need mentors—wise people to whom we can listen. They have experience and can help you find ways to deal with your present situation. We also need friends, those caring people upon whom we can lean. They might not have all the answers, but knowing that they are there for you makes a difference.

In order to finish the work God has entrusted to us, we need everybody. Traditional and contemporary, men and women, youth and adults, first and second generations, accredited colleges and self-supporting ministries, lay members and paid denominational employees. We are one church. When we attack each other, this creates confusion in our youth, discourage­ment in our members, and delay in our progress.

My journey to a lighter me pro­gresses positively. I see less of me when I look in the mirror. My wife has also noticed the change. I am not where I once was, but I am definitely not where I want to be. I see myself improving every day.

My prayer today centers around God giving you a clear vision, helping you to develop a sustainable plan, and continuing to guide you as you lead people to see this before they see it.

Roger Hernandez, MDiv, is the Ministerial and Evangelism director for the Southern Union of Seventh-day Adventists, Decatur, Georgia, United States.

1 Unless otherwise noted, all Scripture quotations are from the New Living Translation.

This article first appeared in the April 2013 issue of Ministry,® International Journal for Pastors, www.MinistryMagazine.org. Used by permission.

We love to hear your comments on this article! 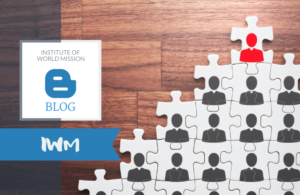 Mission By Any Means

Five Essential Skills to Grow as a Leader